you can't compare Kolkata and Casablanca*

For one, they are on different continents altogether so it just doesn't make sense. Although they have some things in common like having been under colonial rule and having significant Muslim populations, one is Arab and one isn't. In both cities, it is commonplace to speak 2 or more languages, food is made fresh and "from scratch," and cab drivers regularly refuse to run their meters.

But there are differences. Weather, obviously. The climate in Kolkata is "wet and dry tropical" as opposed to Casablanca's semi-arid Mediterranean. This means that Kolkata's annual mean temperature is Morocco's average high during its hottest month. And where Kolkata is lush with vegetation, Casablanca has few native plants that truly thrive besides hibiscus and palm trees. The rainfall in India makes any building older than a year or two look rather drab and Casablanca is famous for its bright white buildings which are truly blinding to look at in the summer sunshine. As to the people in both places, I found that folks in Casablanca are expressive and passionate and very talkative. In Kolkata we are approached by many friendly people, and yet there is a kind of restraint and quiet dignity people's manner.

To me, that is by far the most difficult thing about being an outsider--trying to gauge what people are feeling or thinking by their behavior. I lived for so long in Morocco that communication was relatively easy. Here in India, however, I am almost completely lost when it comes to non-verbal speech, hand gestures and the more subtle facial expressions and only a little less so if we share a common language. Sure, some things are apparently universal, like pinching kids' cheeks. (Ah, you think my kid is cute. Great; so I do I.) But most of the time it's not so clear and I am on my own to attempt to interpret the message. They're not saying anything and they look like they are frowning. Did I do something wrong or he just a cranky guy? Why are people ignoring me when I ask questions? Do they not understand English or am I being too forward? (Who knows.) Head bobbing, with a frown or a blank expression, apparently means any number of things, like: "Yes! Sure, no problem at all, and I am happy to do that!" Maybe it also means, "Wow, you're being a complete idiot right now"? Or perhaps simply "Yes, I don't mind" or "Well, I guess I'll do this but it's a great inconvenience and I'm only doing it very reluctantly," but then again maybe it means "Don't even think for one minute that I'm going to do that, but I'm going to make it seem like I will, anyway, so you'll go away."

Longing for some good ol' Brooklyn directness right about now... (I asked a librarian in Brooklyn for help in finding something once and she said: "No. I don't do that." That's it. No other options offered. I didn't particularly enjoy that exchange but at least I knew she wasn't going to help, right?)

But the main reason that it is impossible to compare them is that one city has a population around 15 million and the other around 4 and Casablanca's population density is somewhere around 9100 per sq. km as compared to Kolkata's 27,400. Yup, that's three times as many people/sq. km here. And that just changes everything about how people get about and relate to each other, as I learned so recently during our brief stay in NYC. Hmm... Maybe what I really ought to be doing is writing a post about how Kolkata compares to New York City...

Speaking of that, I have come across some behaviors that are distinctly New York-like, and not just the kind of tunnel-vision that city dwellers are so famous for (although there's plenty of that). In both places, transportation is a big issue and people have to get creative. Once I saw a couple of guys in NY pushing a load down the middle of a street on a little platform-with-wheels they had obviously constructed themselves. So who cares if they were blocking traffic? They had to get their stuff home somehow, right?

But there was one woman in particular who impressed me like no other. Before I ever lived in Brooklyn, I had often seen parents do this, or this. But this lady, who seemed to be headed to Park Slope, totally freaked me out because she had both seats hooked onto her bike. There she was, pedaling along, with a toddler in a front seat, a second toddler in the back, a basket attached full of stuff and then a huge backpack loaded up with groceries or something on her back. And she was really petite, besides! I couldn't believe she could even hold up the bike while standing, let alone ride it up a hill. Then I spent some time trying to imagine how she even went about loading up the front and back seat while balancing it all... It totally blew my mind. It makes folks who load up a family of four or five on a motorbike seem totally not-hardcore. (Wait, you mean you are not using your own muscle power? Well, I am NOT impressed...)
Although the guys I've seen around town doing this are pretty darn tough: 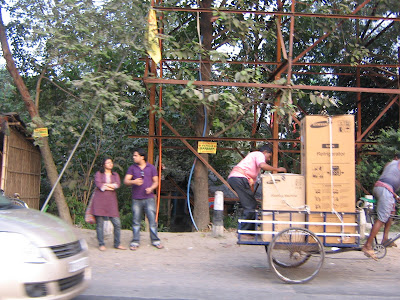 Yup, that's right. He's pedaling along, hauling a washer and a fridge and another dude. (the other day I even saw someone with two fridges and a washing machine.)

So this is an irrational endeavor, to try to compare these two (or three) great cities. But I am smack in the middle of that especially uncomfortable, and irrational, phase of culture shock where one wishes for something familiar and comfortable but instead situations keep popping up that make a girl feel stupider and stupider. Of course, it will pass eventually, and some things will get easier. The rest will just have to wait, I guess.

No matter where you live, there is something universal that bonds people together about our efforts to try to get around, get by and try to make oneself understood, and thankfully, I haven't found a person in India yet who is anything but gracious and sympathetic when I explain that I am new here, and I am just trying to learn.

*for any readers who might not know: the only reason I am even thinking of making this comparison is because I used to live in Casablanca.

I do understand why you compare,it's a spontaneous way to finding a comfort zone,a less foreign and odd situation.you will probably step by step find out that India features are way too "new" and "specific" to be compared/jauged.At this point, speech less or not (due to language and style),you might FEEL it much more than exploring it through any kind of cognitive approach.
You know that I lived in three continents, and in Algeria I had a similar experience as yours in Morroco.
in France,the gap is merely an issue to me but is indeed the main "distinctive advantage" for frenchies towards maghrebian.
in the US,I had to rebirth in order to communicate and learn and share.Most people there helped me out with such great patience and overall through a genuine and welcoming attitude.
however,sometimes I felt terribly speechless and stupider as much as I tried to go further too fast.
For that reason I guess what you're going through,and wish that your journey might allows you to "let the inner child" express herself,helping you to bond with people and leading you to grow-becoming wiser.good luck

Hi,my previous comment disappeared,I'm puzzled.
I understand what you're coming from, as it is a comfort zone seeking to comparing a new such odd situation with previous ones.When you will tune with Indian specificities,you'll find out that they are so "theirs and only theirs", so brand-new (to you) that they could barely suffer an analogy.
You know that I lived and worked in 3 continents.In Algeria,even if I was native my experience was pretty much comparable to yours in Morroco.In France,the gap is merely an issue to me but to frenchies who consider it as their "competitive advantage" over maghrebians.
My life in the US has required a rebirth,to achieving a fulfillment in my learning expectations,to allowing a sharing trend and eventually a rewarding existing feeling.People I met were so patient (for my speechless,or confusing mix of different non-standardised patterns) and displayed such a great welcoming attitude that I even tried sometimes to go faster than I should (and felt stupider until I accepted to slow down my thirst quenching).
Eventually you will get it,through the acceptance to let your "inner child" help you to get along with Indians and bond with them,the bonus will be to feel their behaviours much more than to understand them using any kind of cognitive approach.
Hang on there, you'd become wiser ;)
This journey is a blessing for you (adults and kids).Enjoy the fun.

wow, well-said, maman of lepetitprince! all i can add is the first 3 months are dizzying in the differences between the new and the 'normal'... then the next 3months you can start to understand but still feel 'stupid' on a regular basis... then... wait... you'll be 'home' again! enjoy while you can!

i read a study once that said that a guy on a bicycle is pretty much the most energy-efficient mode of transportation, when you take into account the calories needed to feed him vs. the distance he can go... more efficient than horses, even.

Reading this post was a delight--as was the one above with L. so happy with India. The only better thing I can think of is being there to watch it all...

Really? More than a horse? Huh! I would not have guessed. But that doesn't necessarily mean he can haul as much or as far as fast, right? Because I'd much rather let a horse or mule pull my fridge around than do it myself. I mean, in general. I guess on SOME days I'm up for lugging a fridge, or two...