We have had a couple of guests with us for a week while their parents are away.  It's been a lot of fun.
The kids made dinner one night for all of us: sloppy joes with mini apple pies for dessert.  Yum.

A few weeks ago, we drafted and had everyone sign a kind of "contract" beforehand so that we were all on the same page about household rules and general behavioral expectations.

﻿
It has worked out really well.  No one has complained about duties or scheduling or anything.  It seems to have helped everyone and given us all a sense of structure and predictability about our time together. 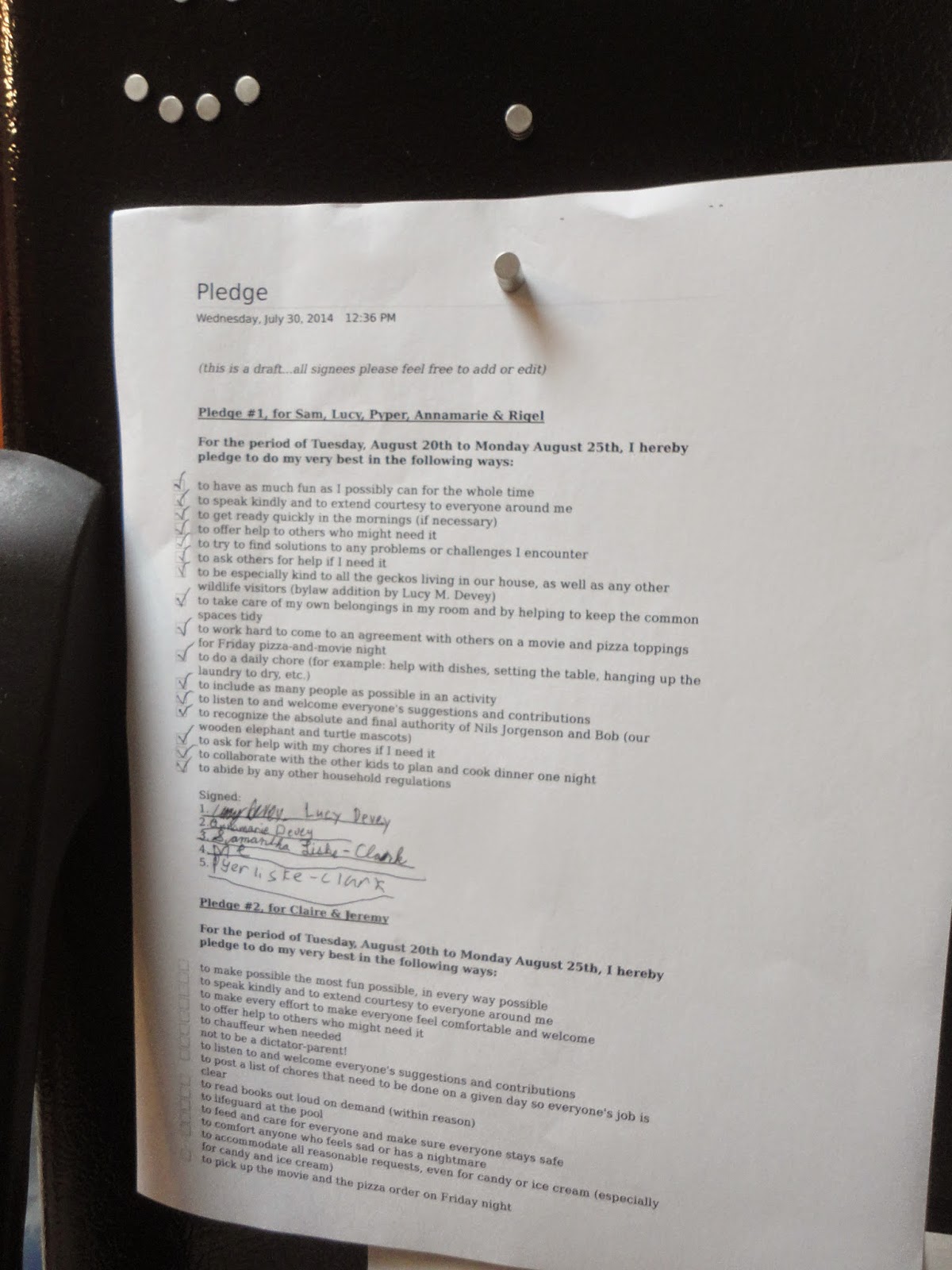 In the evenings, we read out loud from our current chapter book (The Phantom Tollbooth, by Norton Juster) and then have a "debrief" about our day and go over the plans for the next day.
This evening routine is not something I had planned in advance, but it just sort of happened and the kids LOVE it so it stayed.


______
The two eldest girls went to a week-long summer camp through the National Park Service called "Ridge to Reef," all about marine biology and conservation in the CNMI.  It was excellent.  They had experts come in from the Department of Fish and Wildlife and the Bureau of Coastal Management (and others), they got to do bird-watching, hiking in a re-vegetation site, a beach clean-up, they went out to one of the wildlife sanctuaries (an island you can only reach by boat), they participated in the "tagging" of a sea-turtle, they got to ride a semi-submarine... All of that and more in just five days.  ﻿
L. took the camera along to document the semi-sub voyage.  The montage is pretty hilarious (I thought) but I am told they had a good time and even saw a giant humphead wrasse. 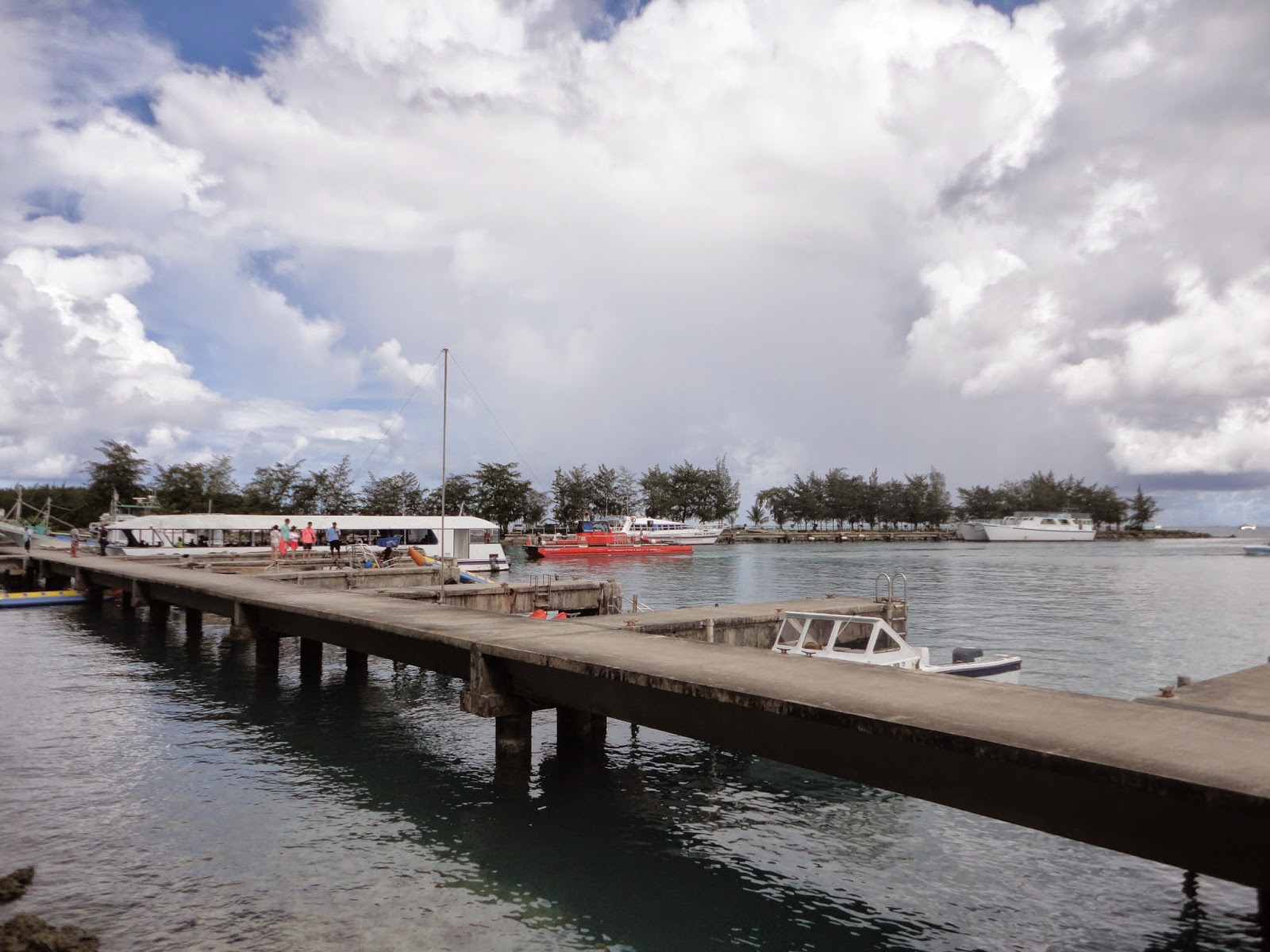 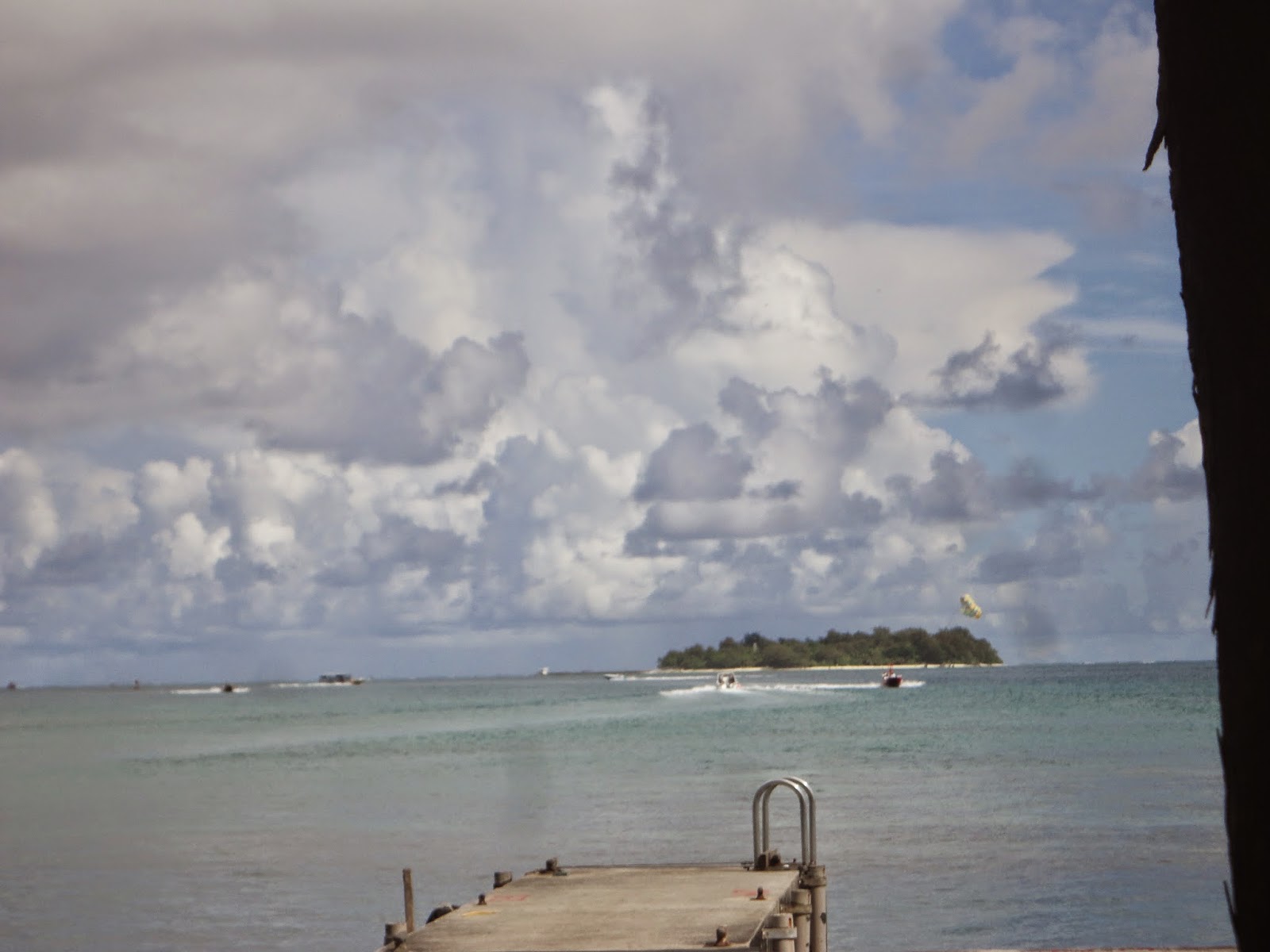 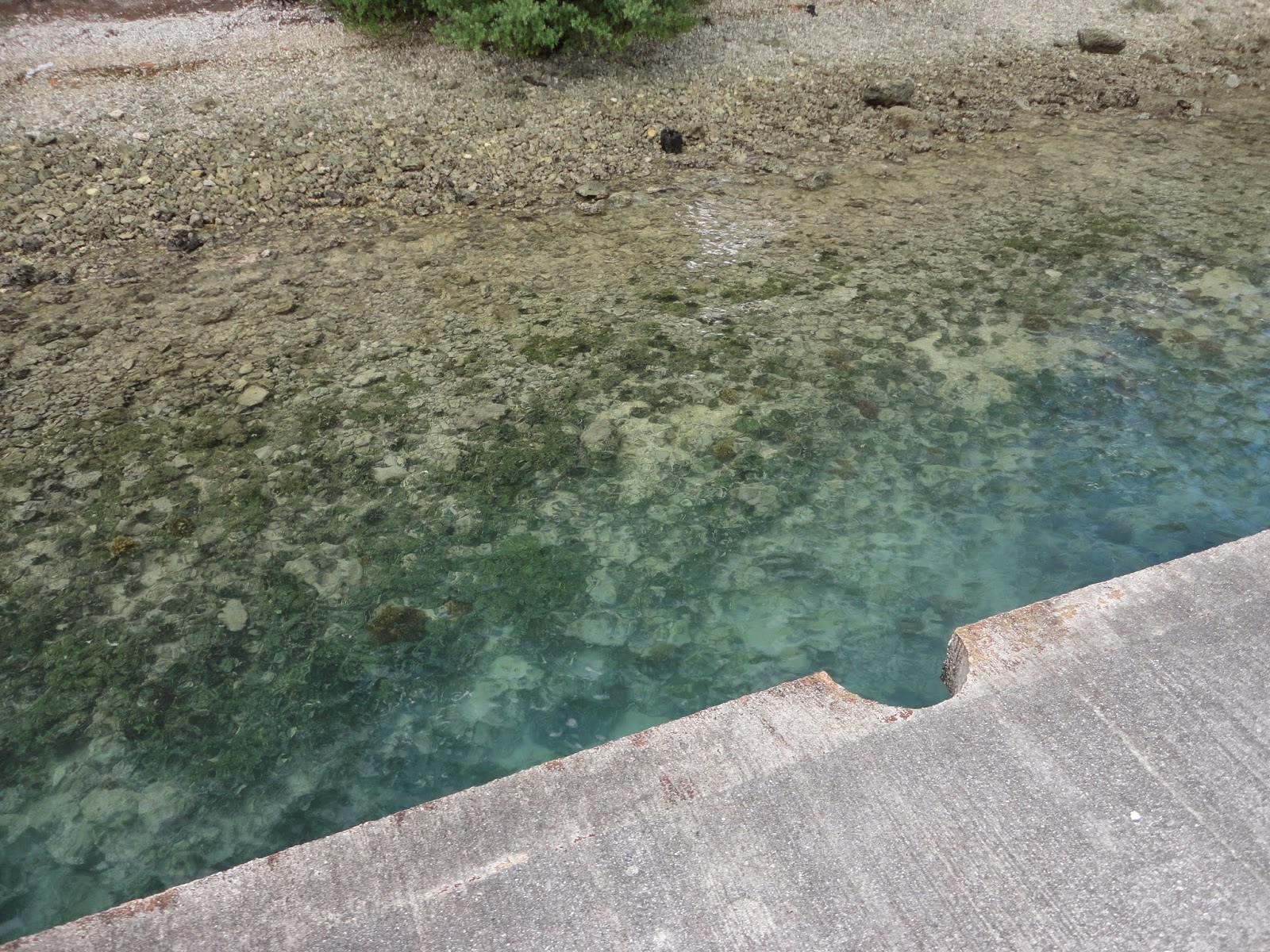 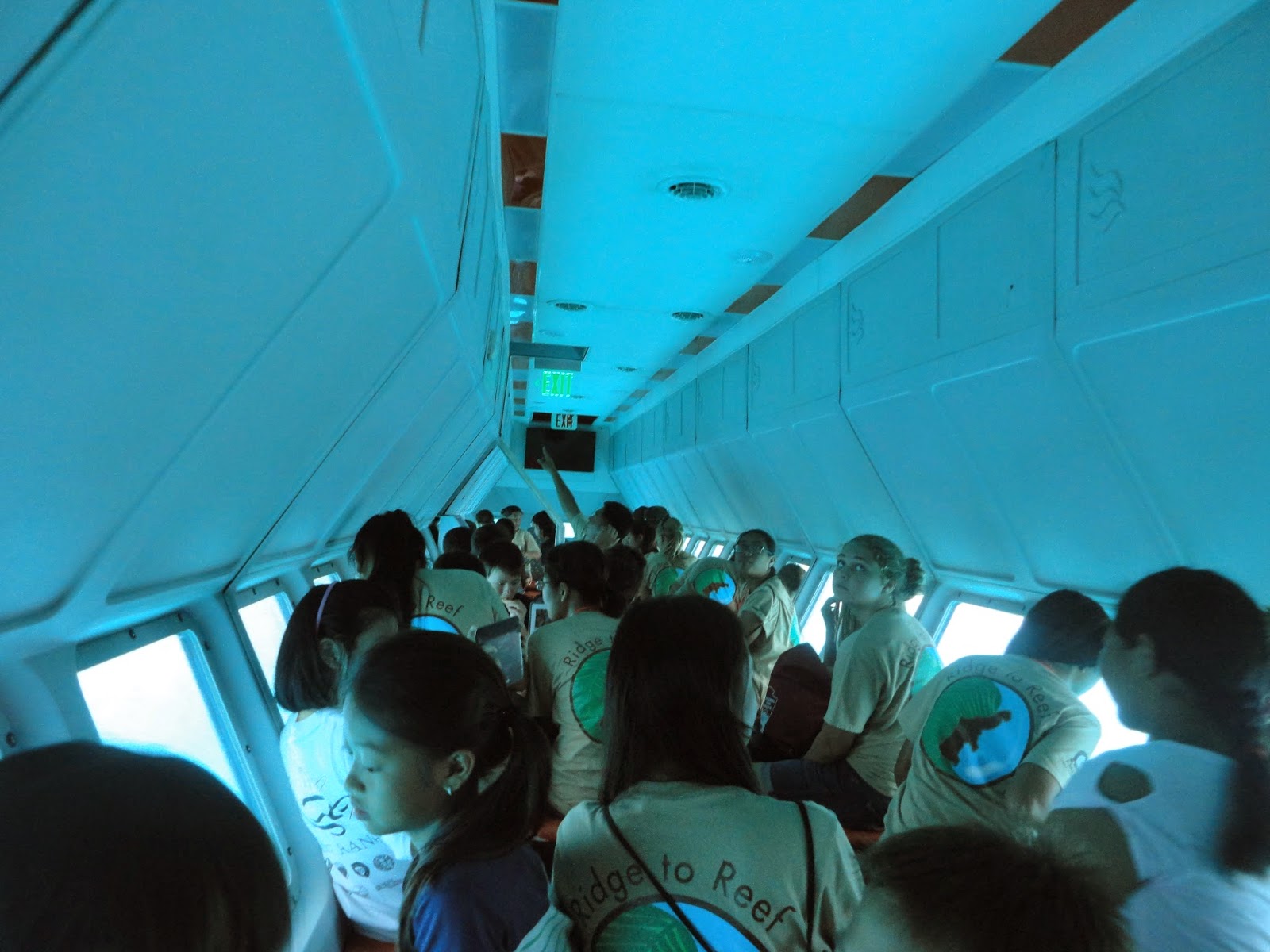 Blurry images of the deep:﻿ 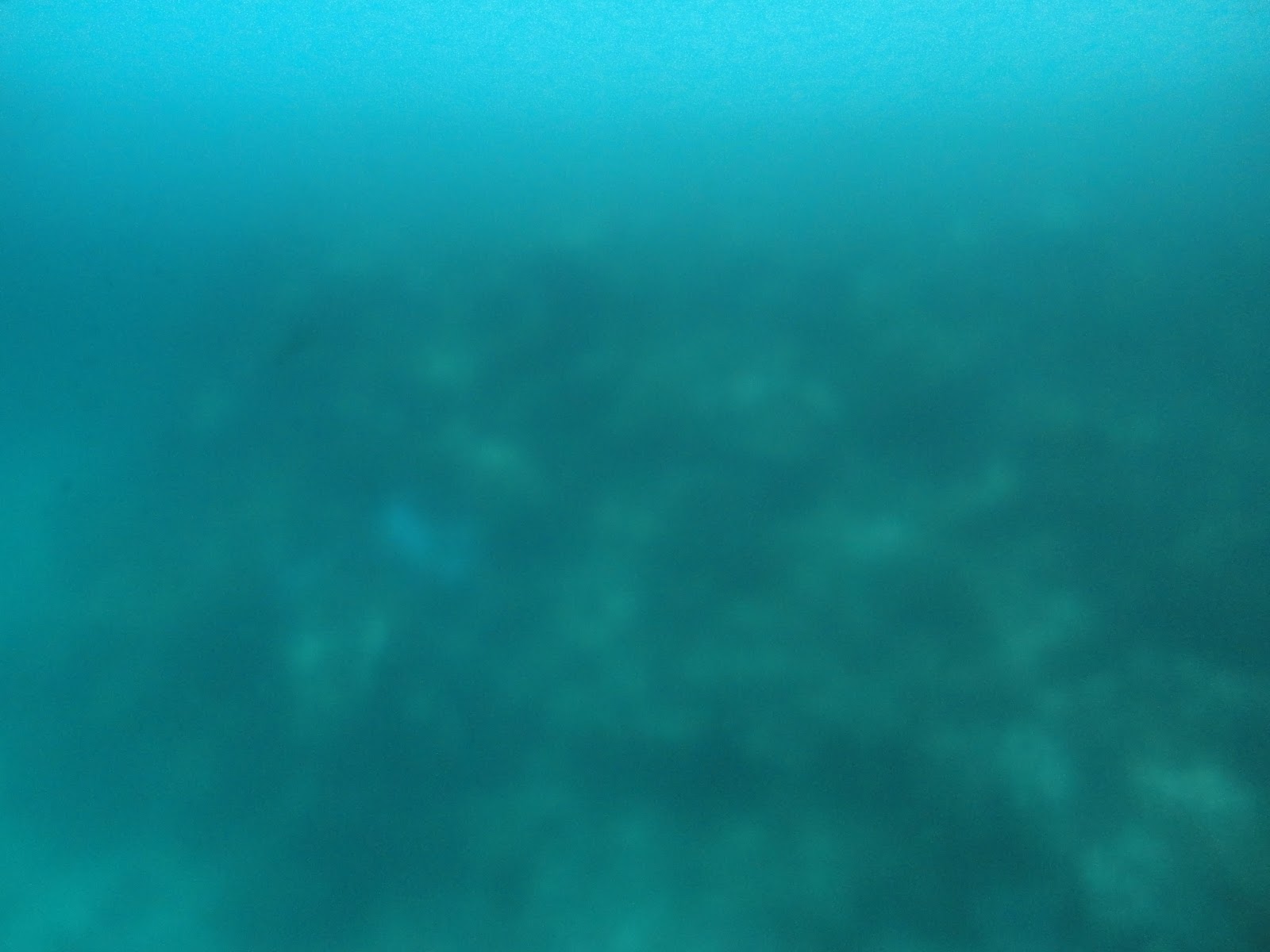 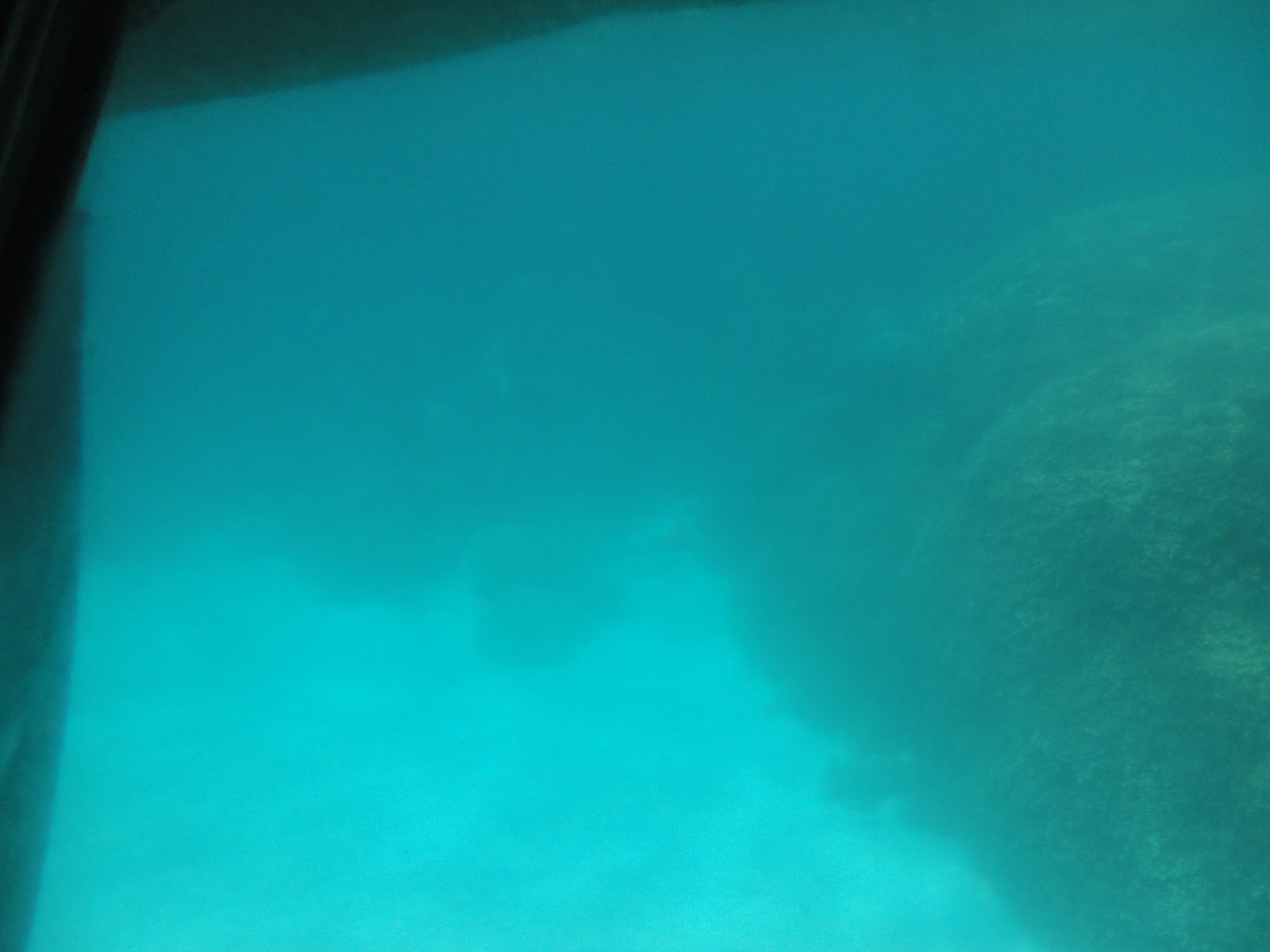 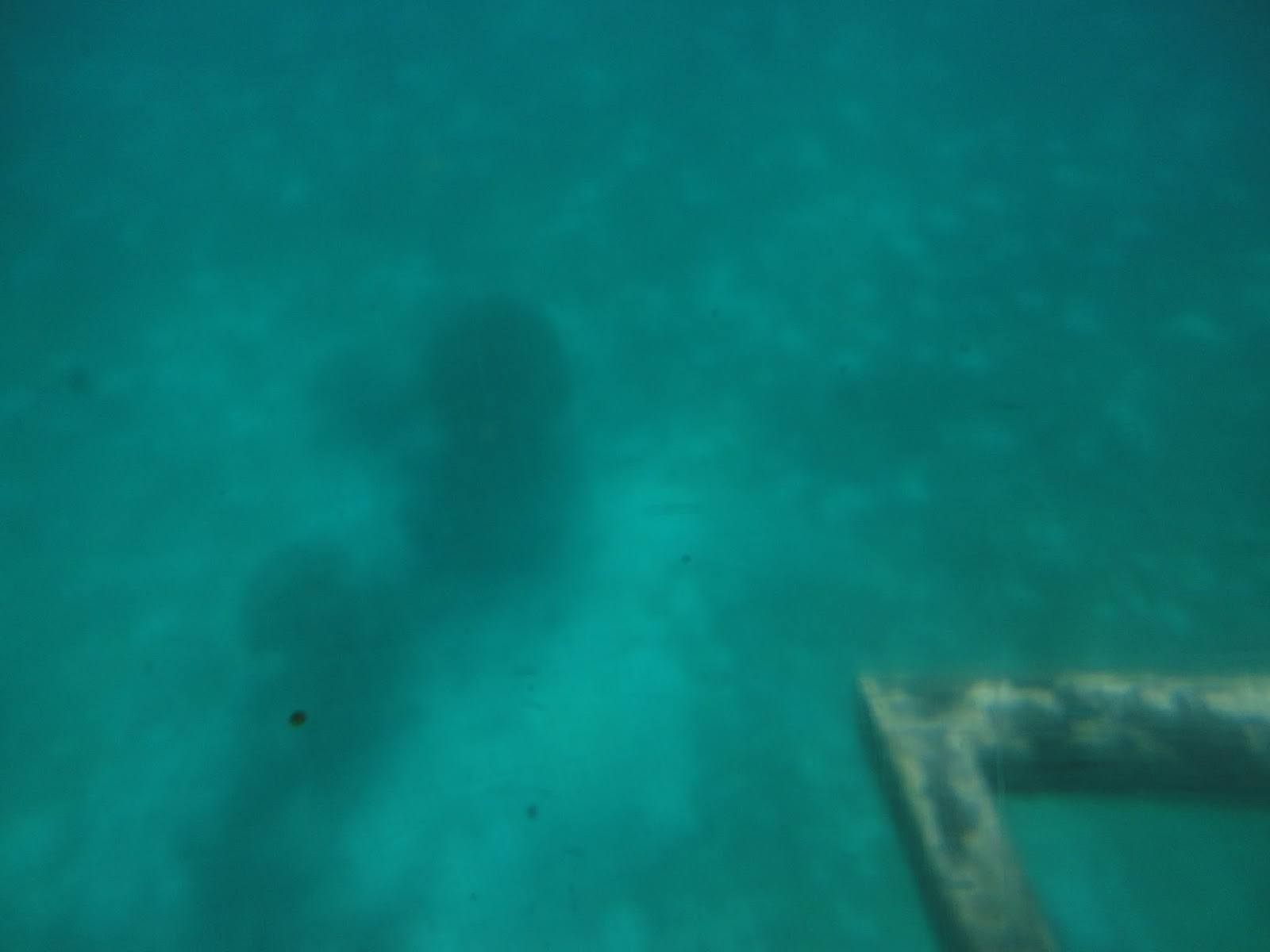 Ah, there he is:
And they learned this song at camp and have been singing it ever since:
________
Probably one of my favorite parts of our week together was when, on Sunday afternoon, after I woke up from a warm afternoon siesta, the kids came into my bedroom with very somber expressions on their faces.

"We have to show you something."
"We really need you to help us."
"I don't know if you can fix this, but I hope so."
(Good grief!  What on earth are they talking about, this sounds very serious!  Why didn't they wake me up?)

I followed them to the living room.

There was a jar on the coffee table, full of grass and covered with a Kleenex that was secured with a rubber band.
"We made sure he could breathe."
"The ants were carrying him away.  He wasn't even dead!"
"We chopped up some fruit and gave the bits to him."
"He is not moving.  But he does move, barely.  He isn't dead yet."

It was a gecko.  Who was very near the end, and they were trying to save the little fellow.
They had written encouraging little notes and displayed them outside the jar: "Get well soon." and "It'll be allright."  With hand-drawn pictures of healthy geckos (for inspiration?). 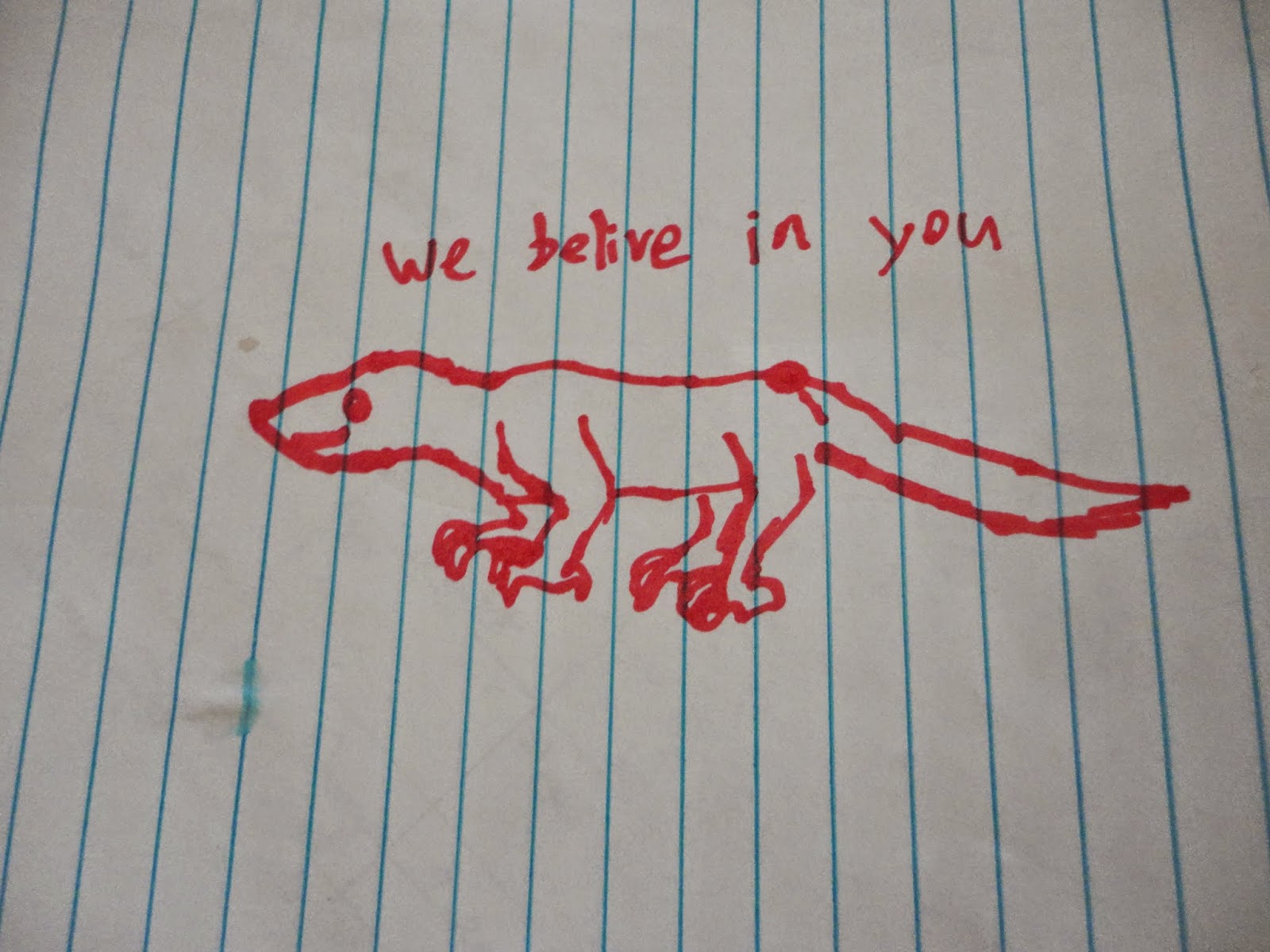 "We thought that some music would help."
"We chose classical music so it would be soothing."
There were earbuds balanced on top of the jar, plugged into an Ipod.

"We looked up information online about what to do and we found on Youtube this one about a gecko who was eaten by ants in under an hour!"
"He is letting us touch him.  Geckos are not supposed to do that!
"What can we do?  Help us fix him!"

Later, after a swim, we checked in on the little guy and he was no longer responsive.  BR broke the news to the girls: "I am sorry, I have bad news: we lost him."

One by one, they filed in to the house to see for themselves.  And then they made the most tragic discovery of all.  Somehow, the music station had been changed and was no longer playing classical tunes.

This is one of several wildlife sanctuaries on the island and a new favorite snorkeling spot of ours.  It's a steep and muddy hike down, but it only takes 10 minutes so it is totally worth it. 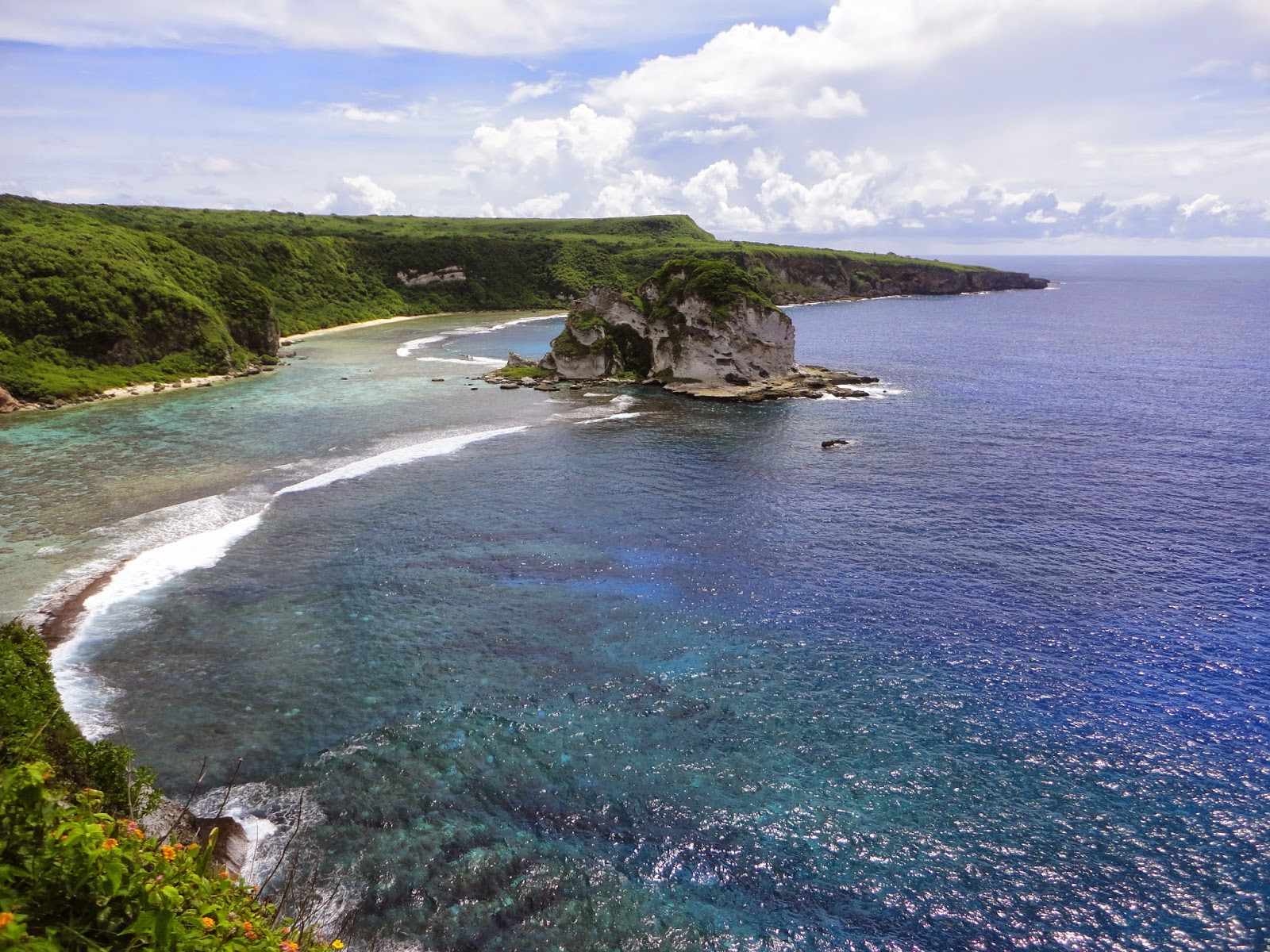 The area up to the little island is shallow and reef-protected so it is quite safe, and the island itself has a lot of little tidal pools on it, some of which are really deep and cool! 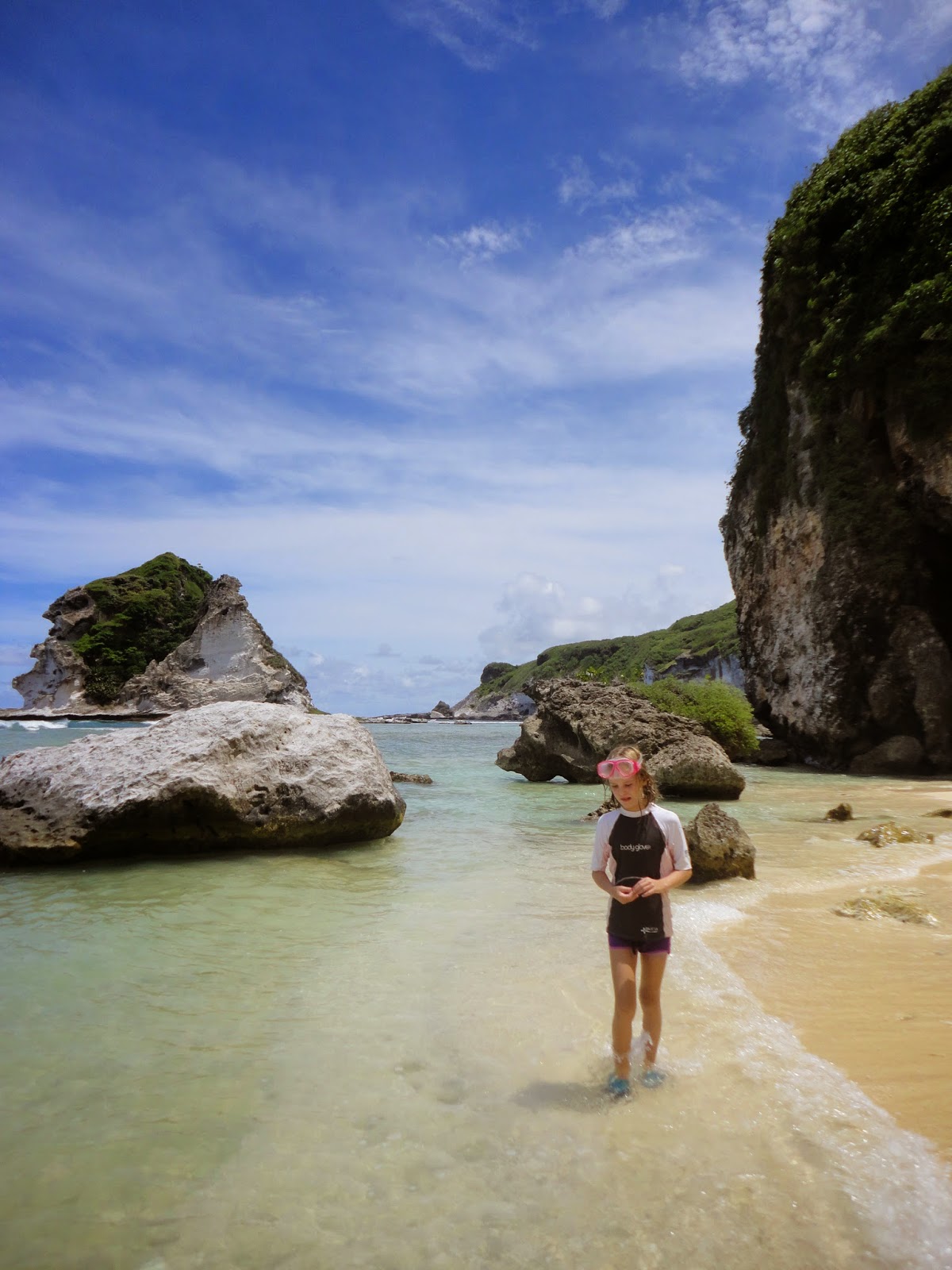 Evidently, if you get too close to the birds or start to climb up on the island to get higher, they freak out and start to dive-bomb you and decorate you with their droppings.  So we keep our distance. 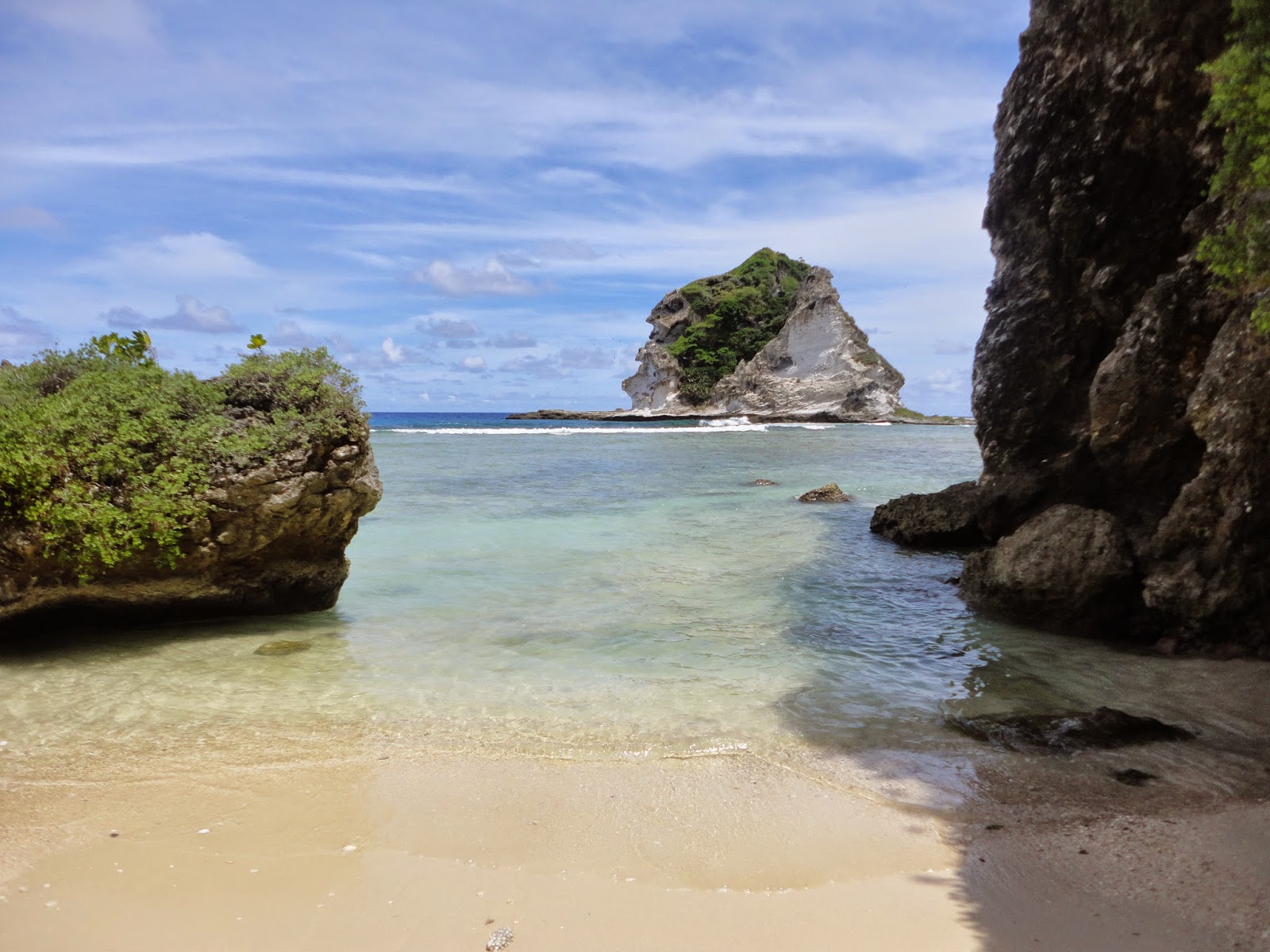 There is an overlook where tourists stop by to take photos.  Here is my crew of three, two of whom turned Korean for this shot. 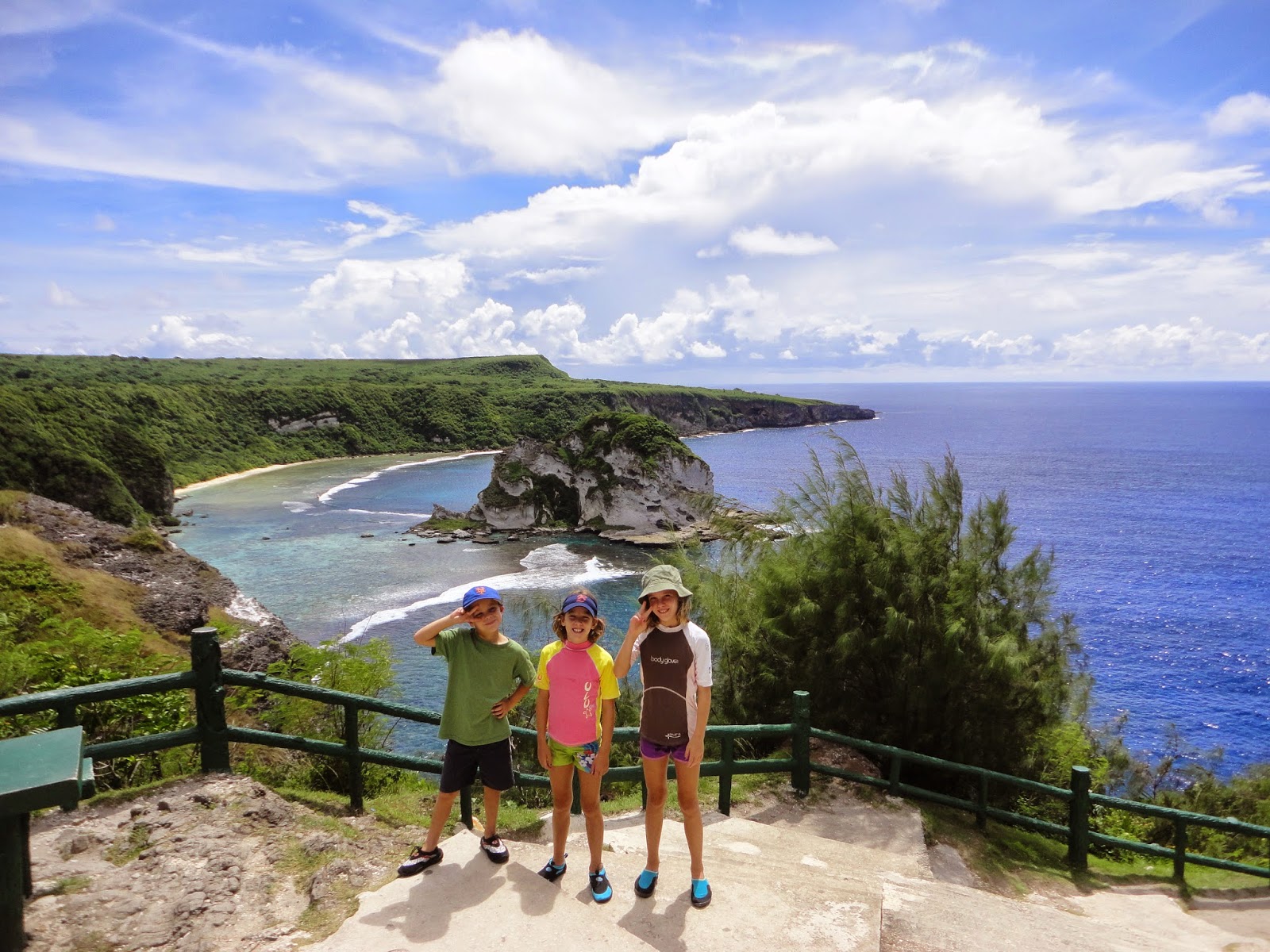 Posted by clairesd at 5:27 PM No comments: 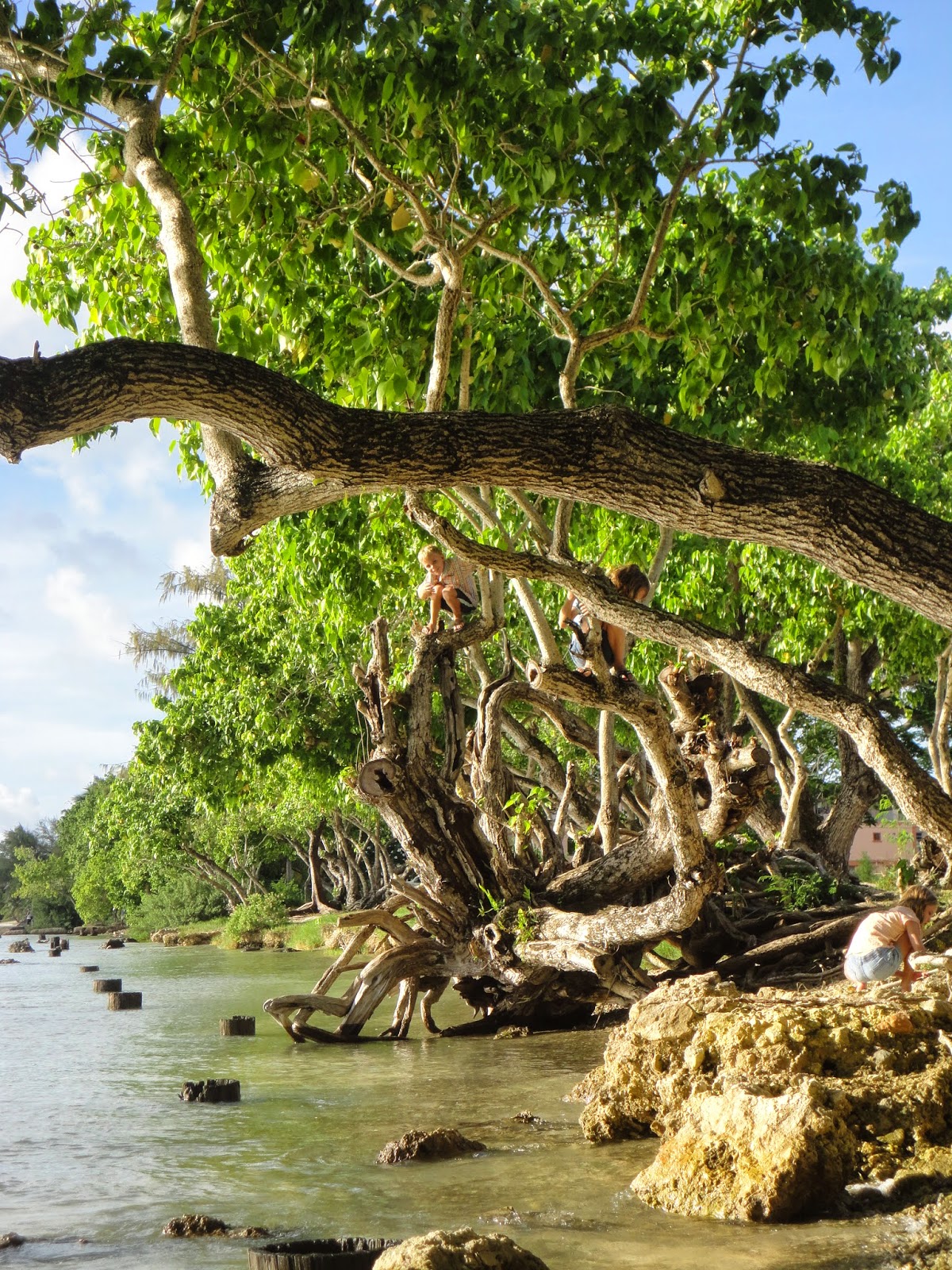 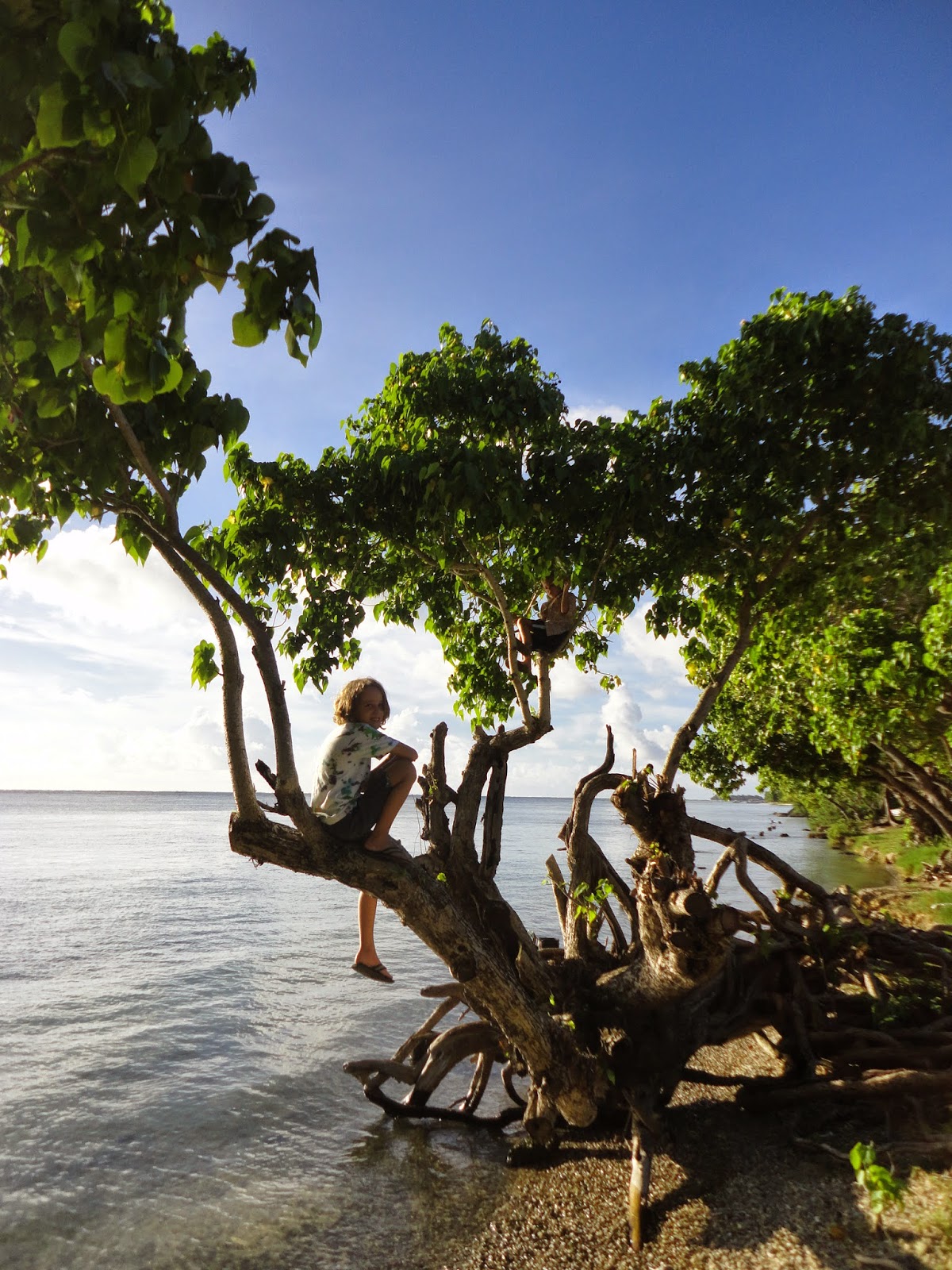 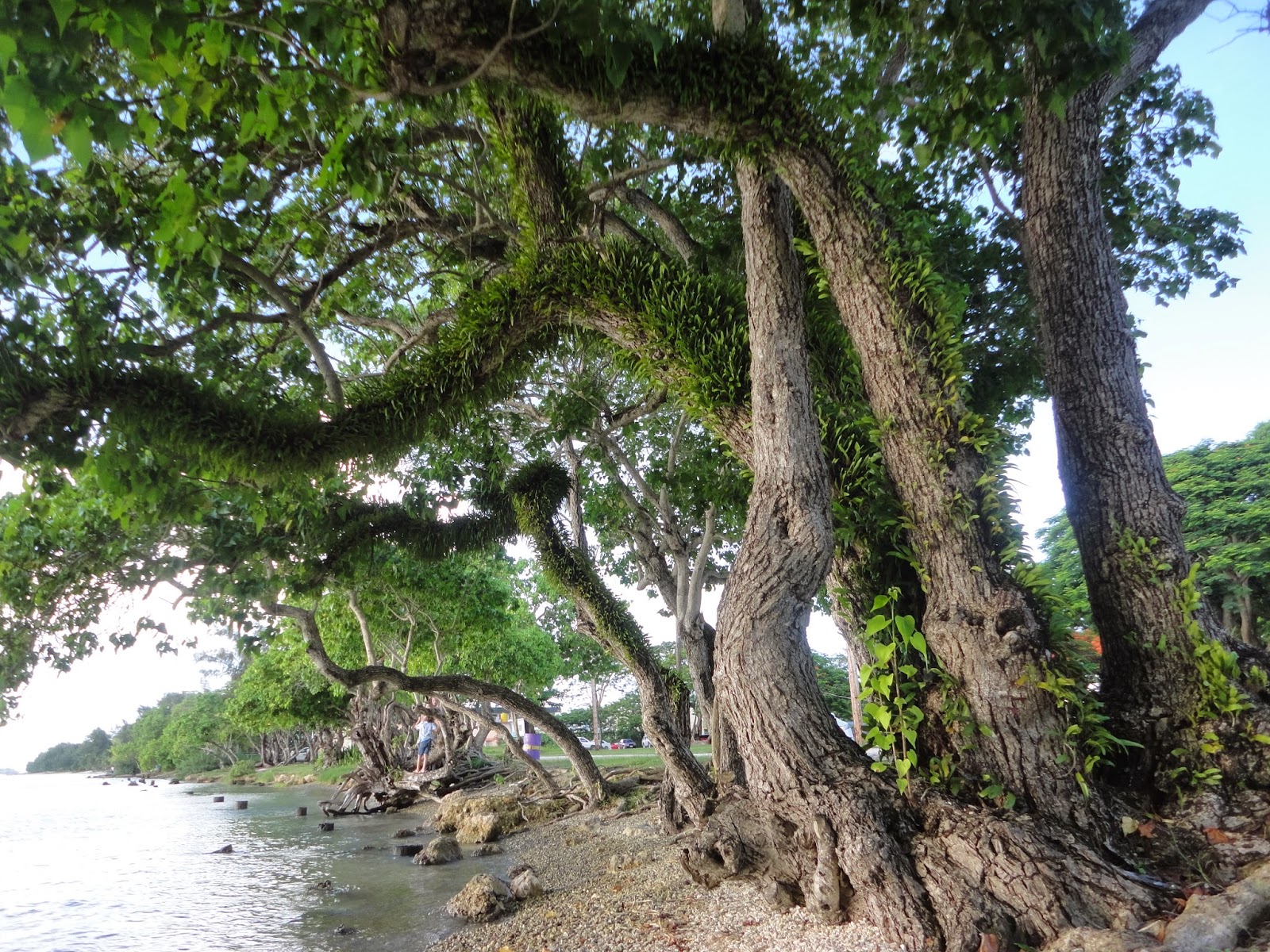 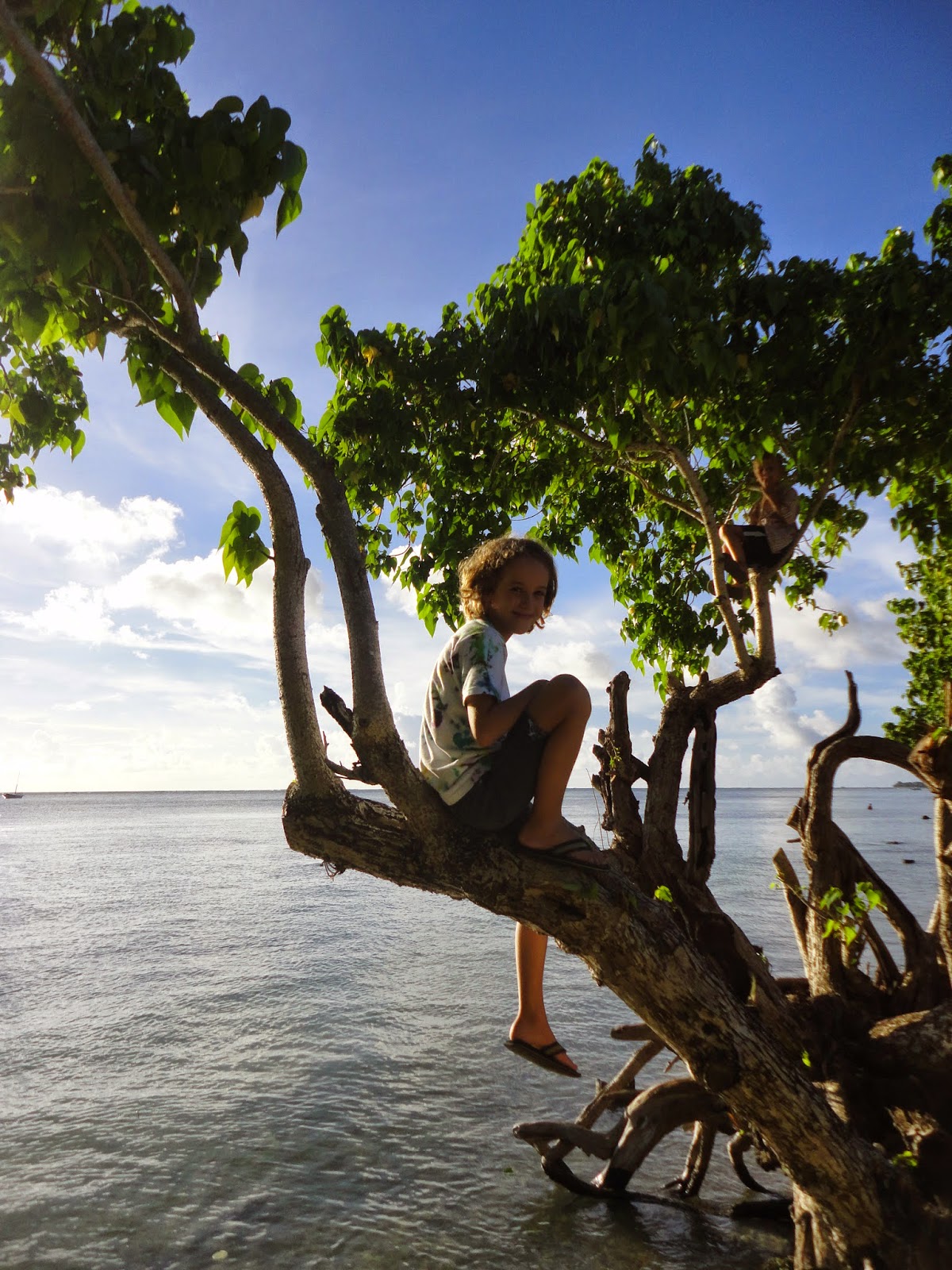 Posted by clairesd at 1:19 PM No comments:

The "initial impressions" post I had meant to write never did get written and now, over 2 months in, I don't remember all of them very well anyway.
I do remember that it took J. and me awhile to realize that comparing this place to other tropical places we had visited just didn't make a whole lot of sense.  The main reason being that Saipan is an island in the Pacific, and our other tropical experiences were in Southeast Asia, mostly on the mainland.
Besides the price of goods, one of the main differences between Asian islands and mainland Asia is the fauna and flora.  Mostly the fauna: there are many, many imported creatures on the island, and plenty of native ones.  Even still, this jungle is really rather quiet.  Especially at night.  Not nearly the buzzing and chirruping and all the rest that you might think.  It is calm and quiet here.
______﻿ 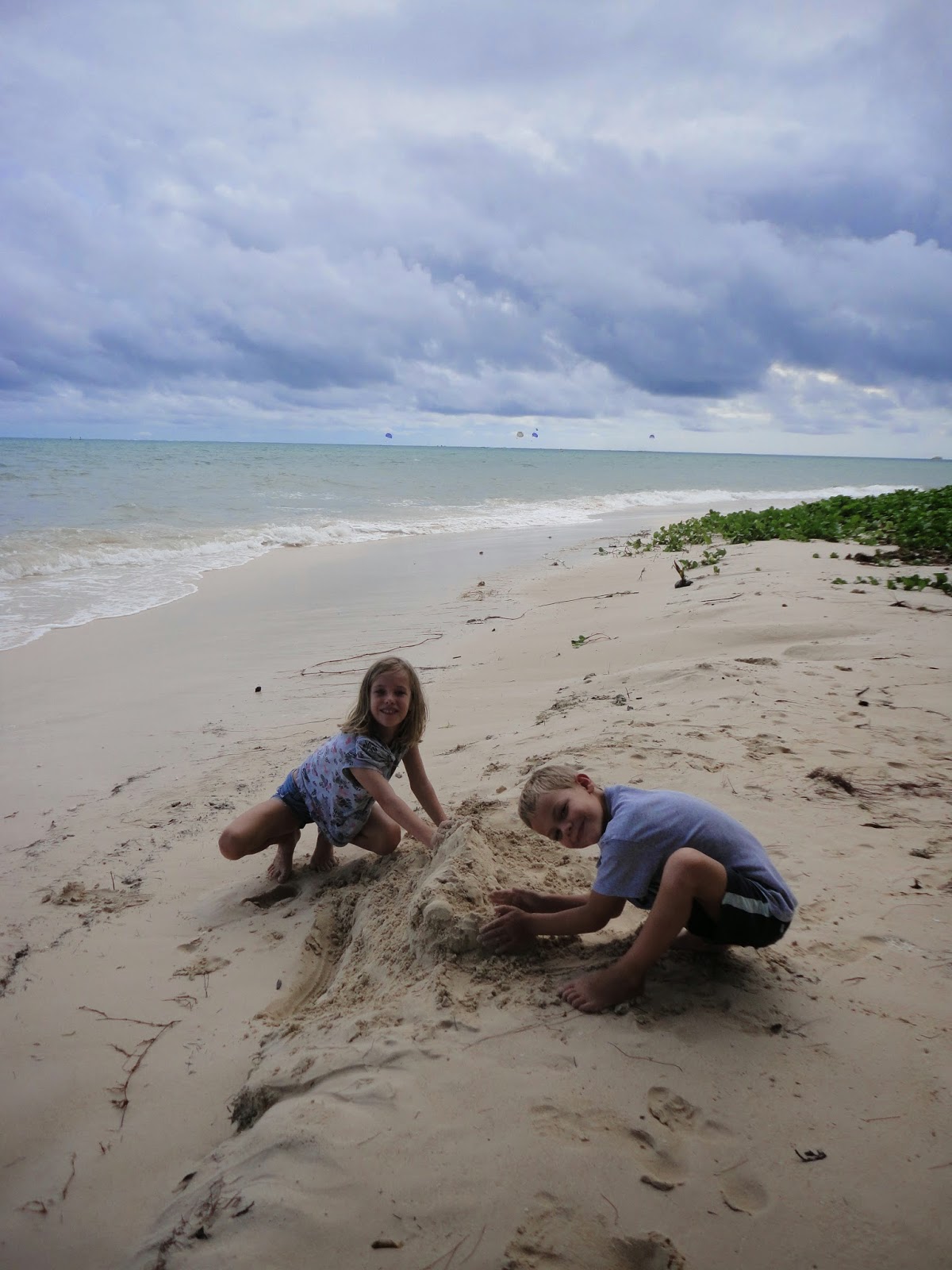 Maybe the quiet is explained by the fact that the wildlife in these parts caught on to the lacksidaisical way of the human islanders.  The joke is that "Hafa Adai" (which means "hello" in Chamorro) refers to the way local businesses are only open for "half a day."  I mean, why work more than you really need to, right?  J. makes endless puns associated with the expression, but I will spare you.


This has nothing to do with the rest of Asia, but is a "fun" fact: there are no physical addresses on the island!
Two things are not fun about this fact: if you want to receive mail, you need a P.O. Box.  The only hurdle being that the U.S. postal service ran out of them years ago (decades ago? who knows), so now the rest of us get to rent some from private companies.  Second problem: there are plenty of US. companies that won't ship to P.O. boxes, so that makes life just that much more interesting when trying to order necessities online.  (And don't even get me started on how many companies won't ship to Saipan, along with other U.S. territories.  I cannot understand this, given that postage rates are domestic.)

The other absolutely hilarious thing about having no addresses is that there are no addresses at all.
And no recognizable street names outside of Middle Road and Beach Road.  (To be fair, there are streets with names, but no one knows them since it is fairly recent).

Allow me to explain why this is a problem: you can't just tell people where you live and have them look it up.  You must provide detailed directions, or draw a map, or meet them somewhere and then have them follow you.  Because kinda everyone lives down an unpaved road of some kind with multiple turns and you have to pass a chicken farm at some point (why is it always a chicken farm?).  A little like life on the Rez, to tell the truth.  But the main difference is that destinations are all within a 44mi. square radius so this should be easier, in theory.

Some friends told us about a live radio broadcast they heard once during which the two co-hosts of a morning talk show tried to explain the location of an upcoming event by referring to nearby landmarks.  Evidently, it was a little complicated to do and they kept correcting each other and the conversation lasted for almost 10 minutes.

﻿
Now, you might think that folks would get pretty good at giving directions in a place like this, but it is quite the opposite.  I can't count how many times I have been told, "Oh, you just go down there, and keep going and then it is on your left!" and that's all I have to go on.

As a very orientation-conscious person, who prides herself on knowing how to get from here to there, and being able to describe it to others with both detail and precision, with plenty of landmarks and street names included, this just makes me ab-so-lute-ly nuts. 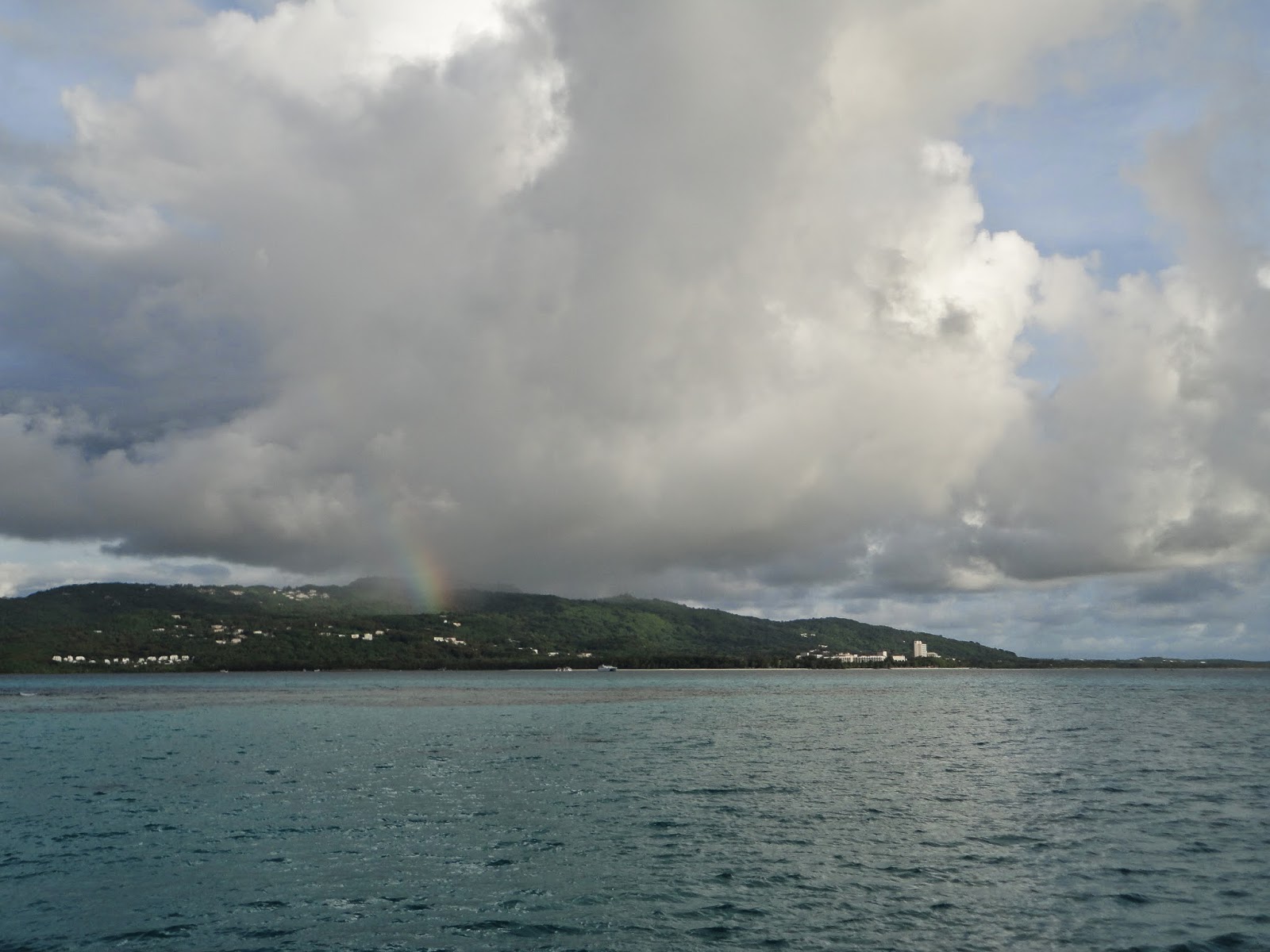 Tropical storms: A typhoon recently hit Guam and Rota (another island) but we barely saw any of it.  Others have told us that when the season really kicks in, the island's supply chain can get delayed for weeks and supermarkets run out of essentials.

﻿
Luckily, we have a breadfruit tree in our backyard.  Phew.*


* that's a joke.  I have yet to find a practical use for breadfruit.  (Although according to Wikipedia, "Native Hawaiians used its sticky latex to trap birds, whose feathers were made into cloaks"! So that's always an option...)


_________
There are monitor lizards on the island.  They can get pretty big--someone told me that at least one has been spotted that was 5 feet long.  Daddy and BR saw one in our neighborhood that was somewhere between 18 and 24 inches long.  Very cool.
And then yesterday an equally large one showed up on our back patio and was caught sniffing around at the pool.  No photo this time, and I missed it again, but hopefully I will get a glimpse next time.
﻿
Posted by clairesd at 4:24 AM 1 comment: