One from whom folks hide their faces

Remember the census in the Nativity story? The part where Joseph and Mary had to travel to Bethlehem to be counted and it was so crowded with others like them that all the rooms were booked. Haven't you ever wondered: if Joseph was from Bethlehem, then where were all of his relatives? Didn't he have any brothers, cousins, uncles—anyone who might have thought to save them a spot in their home, at an inn, or a room off the kitchen? Was Joseph alone in the world, or did his family refuse to help?
Who knows.
So they end up in a stable. But then, why a manger? Newborns are not especially wiggly and are unlikely to roll away or inadvertently injure themselves. So why does the Gospel tell us that Mary put Him in a manger? 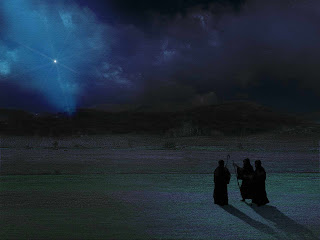 Maybe because they needed a safe place for Him and it was the best option. Maybe the stable was just that crowded—that there was no extra space anywhere, not even for a baby. And maybe every other surface was just too filthy. The space was so full of animals and people that, pressed up against a wall on one side and a goat or donkey on the other, the warmest and safest option was the place closest to the animals' breath, rather than its' hooves.

There is no shortage of dirt around Kolkata so I can easily imagine a scenario in which it is difficult to find a suitable place for a baby. Even in our luxurious apartment we wage a continuous battle against dirt and disease; anytime we leave home we return home to a full scrub-down in the shower (usually twice a day, and yes, that process is a joy for us all). But that's nothing compared to the challenges faced by families who live in lean-to's on the sidewalks of this city. These children are at especially high risk and their morbidity rates are no doubt among the highest on the planet. When these kids get close to mine, I worry about lice, TB, maybe even typhoid.

Chicago, San Diego, Denver, New York—all the cities in which I have recently lived—have plenty of poor folks in various states of mental or physical disorder. Many ask and hope to receive, and while some are shy, others are very persistent. It is not always pleasant or pretty.
Earlier this year in Colorado, I took A. downtown for a haircut. L. must have been in school that day because BR and I were alone in the waiting area, flipping through a magazine or something, I don't remember. A couple of other customers showed up and we barely noticed until one man tried to strike up a conversation with BR.
"Getting a haircut today?"
Silence.
"You're all grown up—gonna sit up there in that tall chair all alone? You gonna be brave?"
More silence.
BR's rule is not to talk to strangers, ever, and mine is not to pretend they are talking to me. I tried not to interfere. Also, the guy was a little too loud, a little too friendly, and also he smelled very strongly of urine. He seemed a little…off. Maybe he would go away soon? But BR was shrinking and cringing and I could tell that this man was not going to give up.
"I'm sorry," I spoke up, "he doesn't talk to anyone he doesn’t know. He's very shy around strangers...you know?" I tried to look relaxed and convincing. I hoped he understood: See? We're friendly folks; it's nothing personal.

It must have worked. Next thing you know, the man launched into a stream of stories about the many other children who are afraid of him, and the parents who are to blame for fostering that kind of fear in their children. He was indignant; after all, he was in a wheelchair! What threat could he possibly pose to a young child standing several feet away, he wanted to know.


I nodded. Yes, how utterly ridiculous. (And then I quietly stabbed myself in the chest with a handful of invisible forks for being such a fake.)


A.'s haircut, though not exceptional (I seem to remember that I had to return a few days later for some repairs), dragged on. There was plenty of time to hear about this man's difficulties with his unreasonable landlord (he was not, as I had wrongly suspected, homeless after all), the challenges of life in a wheelchair and the difficulties of riding on buses that it entailed. Some folks were thoughtful, he told me, but others simply walked right past even when the chair tipped him over one day and he fell to the ground. "One man had a cell phone but he didn't offer to call anyone for help," he said. It occurred to me then to ask how long he had been in the chair. "Two years," he said.

Eventually, A. climbed down from the chair (beaming, as usual) and it was time to go. Our new friend leaned forward toward me. He was, indeed, in desperate need for an all-around trim (beard and hair), and it gave him a sort of crazed look. And then of course there was still the smell.
"Can I ask you something, Miss?"
Now, I wasn't exactly afraid of him anymore, but I dreaded what he might say. I mean, maybe he really was nuts after all.
Cringe. (Sweat.) Breathe.
"Well, maybe…" It seemed safest.
He looked embarrassed, but sincere: "Do I have a body odor? I mean, is it strong? Because I can't shower all that often now that I don't have a care provider coming to my home anymore. It's hard to bathe…with the chair, you know…"

I guess I imagine that, what with the glow around the manger and all, the shepherds and wise men and everyone else standing around the Holy Family would be craning their necks, trying to catch a peek at that beautiful and holy Child.
But maybe I've been too selective in my reading and I've missed the point of the story as it exists as a whole; maybe in infancy Jesus' life on earth was no different from the one he led as a man. Jesus did not have a proper bed as an adult, either, and he gave potential followers due notice: if they joined Him, they would lead an existence lower than that of most animals, with "no place to lay their heads." I guess that's just it, Jesus wasn't the kind of person everyone wanted to hang out with—ever. He was, in the words of the Prophet Isaiah, one "from whom people hide their faces." You know, the kind of person you would rather stay far away from; the ones you wish would go away and for heaven's sake stop talking, already.

This isn't a traditional heartwarming Christmas tale, I know. But to me it's comforting: there they are, all those folks in Bethlehem—the shop owners, innkeepers or the travelers—all busy, probably overtired and overworked and harried by the census officials. Some are oblivious and some attentive to this tiny, silent and unremarkable Infant in His makeshift bed.
And there He is: Immanuel, God with us.
Whether we cringe and back away, or lean in to get closer to this Presence among us.

Hey Claire, I really appreciated this Christmas post. You write so well! I have often wondered the same thing about the manger, at least since having my own infants. Surely they used slings back then? I've wondered about the relatives too--were they shunning Joseph because of Mary's condition? Thank you for sharing your thoughts, and Merry Christmas!